Full Name
Jules Miller
Job Title
Founder
Company
The Nue.Co
Speaker Bio
London native Jules Miller was no stranger to supplements when she founded The Nue Co. Having grown up with a doctor for a grandfather who specialized in the study of Vitamin B12, she knew the basics. It was only after she personally turned to supplements as a means to combat IBS, however, that she started to see the problems within the industry.

She found that, as a general rule, 50% of the ingredients in supplements are composed of synthetic fillers, bulking agents, and processed ingredients –– all of which made her IBS worse. Disillusioned by brands touting misleading messaging, questionable ingredients, and poor quality products, Jules realized that she could create a solution.

She left her job as a marketing executive to take on the supplement industry, developing products that utilized scientific research, clinically tested and clean ingredients, and the best practices from alternative medicines like Ayurveda. By the time the brand launched in 2017, Jules had become a pioneer, redefining the entire category by creating products like Debloat Food + Prebiotic, which has consistently sold-out year after year and which many customers have called “life-changing.”

With features in magazines like Vogue, Allure, GQ, The Cut, and Byrdie, and awards from Into The Gloss, GQ Grooming Awards, and MindBodyGreen, it was clear that Jules had touched upon an inherent need. “Our mission is to make a profound difference in our customers’ lives,” says Jules. “If you buy a product from The Nue Co., you should feel it working. So much so that you come back month after month.” The brand prides itself on its approach to efficacy, which is best represented by their repeat purchase rate (which currently sits at 65% compared to an industry average of 10-40%).

Within a year of founding the company, Jules had raised $1.5 million in seed funding, from investors including Unilever Ventures and Morningside Group, a billion dollar fund investing in biotech, Harvard Medical School, and green technology. The funding led to further investment into NPD, which delivered a 15 SKU product pipeline that included supplements for a multitude of benefits including sleep, gut health, and stress. Jules was also able to open the brand’s first physical pop-up, a store located in the Tribeca neighborhood of New York City. From there, Jules continued to expand the product line, launching supplements including their bestselling Prebiotic + Probiotic, topical skincare product Topical - C, and tinctures like Defense Drops and Sleep Drops.

As of today, The Nue Co. has raised an additional $9 million in Series A funding, launched over twenty products with more on the way, and opened an office in Jules’s hometown of London to support their expansion into Europe while still maintaining their New York City HQ. Innovators in the truest sense, The Nue Co. is among the first health brands to open the doors to a new realm of distributors including Dover Street Market, Opening Ceremony, Kith, Liberty London and Soho House. In addition to being stocked in over 100 retailers, their products are also available in Nordstrom stores across the U.S. and Canada. And Jules is just getting started. As The Nue Co. gears up for another year of triple-digit growth, the brand has global expansion on its horizon, with 2020 on track to be the brand’s biggest year yet.
,
When she’s not at work redefining the supplement category and taking on the wellness industry, Jules advocates for mental health awareness, gender agnostic brands, and sustainability. Jules splits her time between New York and London with her husband, Charlie, and their beloved french bulldog, Lola.
Speaking At
EXECUTIVE PANEL: MAKING INGESTIBLES YOUR USP
FIRESIDE CHAT: THE IMPORTANCE OF ‘CLEAN’ FOR INGESTIBLE PRODUCTS 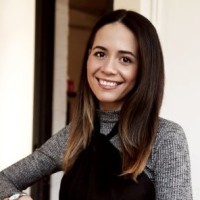